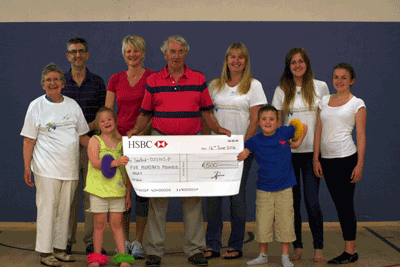 Tim Armour from Telscombe Stud Farm presented us with a cheque for £500 at the June drop in.

Telscombe Stud Farm raised the money with their May Bank Holiday weekend open days. The proceeds of the weekend have been shared with Breast Cancer U.K., with both charities receiving £500.

The dedicated team at Stud Farm in Telscombe village, raised the cash by holding their annual open Bank Holiday weekend for the public.

During the two days there were tractor rides around the farm with a very informative commentary from Tim. There was also lamb feeding, pony rides, face painting and the ability to handle some of the farm animals along with an up close and personal encounter with ferrets that were on loan to the farm and birds of prey, courtesy of a local falconer.

Delicious home made cakes provided by the generous team of helpers, along with fresh burgers and sausages made with locally produced meat, proved to be in great demand!

The farm is also home to racehorses of Studfarm Racing, which are trained on the farm and up on the South Downs by Tim’s daughter Camilla and raced all over the country. They have also raced in Dubai and Australia, coming 5th in the Melbourne Cup.

The team at Telscombe Stud Farm worked extremely hard over the extended weekend and raised a fantastic amount for both us and Breast Cancer U.K.

We had a lot of fun visiting a working farm and can’t wait for next year’s event.

A very big thank you to all involved that worked so hard to make the weekend a huge success.

The Stud Farm was owned and managed in the early 20th Century by Ambrose Gorham who was responsible for the 1902 winner of the Grand National – Shannon Lass, one of only 13 mares to have won the race since its inception. Upon Ambrose’s death in 1933, he bequeathed his property, Stud farm, in trust to be administered by the Brighton Corporation. Today, the land is owned by Telscombe Village Council where Tim and Nina Armour and family, have been the tenant farmers for the past 30 years.