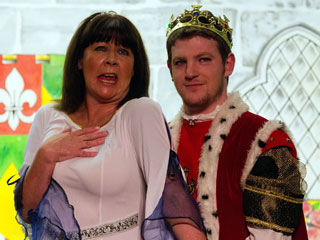 Seaford Rugby Club raised £750 by selling tickets to the clubs pantomime that was held in January. This was matched by Barclays Bank.

The Seaford Rugby Club Charity Players performed three shows at Seaford Rugby Club at the end of January this year. It was a very alternative panto – B’stard which was losely based on Robin Hood and directed by Paul Ungoed. The cast and crew excelled themselves once again and delighted the audience with banter, a dance routine, plenty of double entendres and flashes of flesh! Mike Still created a film trailer to warm the audience up. This panto crew have a cult following and the audience support was immense and very generous.

There were six new players this year (panto virgins) who brought a new energy to the show.

The Seaford Charity Players were delighted to donate £750.00 to Seaford Down’s Syndrome and Special Needs Support Group and this was matched by Barclays Bank. A further £750 was also donated by the players to the Matt Hampson Foundation.

Many thanks go to both the Seaford Rugby Club and to Barclays Bank.