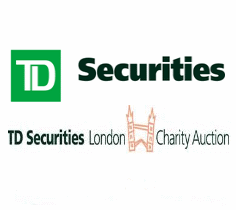 TD Securities London raises an amazing £88,000 for it’s four supported charities in 2014. Seaford Down’s Syndrome and Special Needs Support Group is one of those lucky charities!

On June 26th 2014, TD Securities London, held their annual charity auction, with employees bidding on over 300 items in a combination of silent and live auctions. Items auctioned ranged from ladies semi final tickets to wimbledon, night out with the PAs, speciality wines and whiskies, personal shopping experience for Selfridges and a personalised calendar of the IT team.

Each of the charities involved received a fantastic £22,000.

Special thanks go to group member and TD Securities employee Jon Davies for nominating us, Jacqui Douglas and Joanne Walsh and the rest of the TD charity committee for all their hard work in organising the event and of course to everyone that attended this years charity auction.

About TD Securities
TD Securities is a leading Canadian Investment bank and financial provider with offices in London, New York, Singapore, Toronto and across Canada.

Now in it’s 17th year, the TD Securities Underwriting Hope Campaign and Auction has raised a remarkable $1.35 million in Toronto and £88,000 in London. Since the charity auction began in 1998, TD Securities employees have worked hard to raise awareness and collected donations generating over $10 million for children and their families.