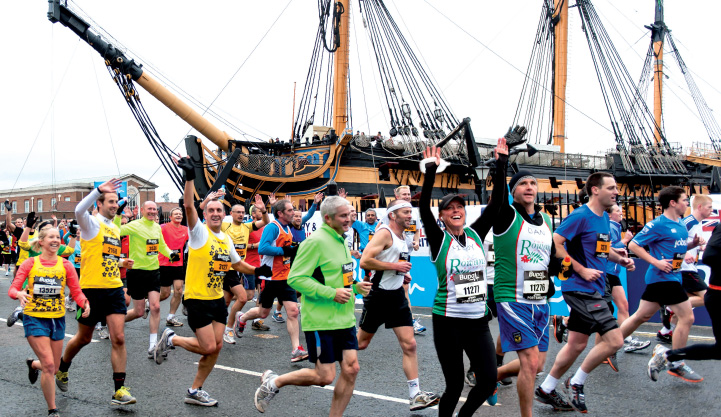 Rory Dunstall, Tom Evans and Ryan Tucker from STL took part in this year’s Bupa Great South Run. The boys successfully ran 10 miles on the 27th October 2013 and we are lucky enough to be their charity of the year!

A big thank you to STL for their continued support and for Rory, Tom and Ryan for signing up for the Great South Run.

UPDATE: The boys from STL have raised a fantastic £240, but there is still time to sponsor them retrospectively! Please help by showing your appreciation to the hard work the boys put in to this challenge.

About The Great South Run
The Bupa Great South Run started life in Southampton back in 1990 before moving just a few miles along the M27 motorway to the neighbouring city of Portsmouth 12 months later.

The fast and flat 10 mile route takes in the iconic sites of the Portsmouth Historic Dockyard including Portsmouth Cathedral, Spinnaker Tower and the HMS Victory- which has played host to the Band of HM Royal Marines, who often perform for passing runners at the iconic site. The final flat stretch along the seafront has given thousands of people the opportunity to get a personal best time for more than twenty years.

Every year the event attracts a plethora of athletes, celebrities and runners raising money for good causes, with over £30 million having been raised for charity over the years.

World class athletes who have taken part over the years include Sonia O’Sullivan, Paula Radcliffe and Mo Farah- who scored the first ever victory by a British male athlete since Gary Staines achieved his third and final success 13 years earlier.

STL – Planning & design solutions was formed in August 2006 to provide support for one of the countries leading retailers. Since their formation the size of the company has grown considerably together with their knowledge base and the services they provide.

Along with retail design they now offer their many services across residential and commercial developments. Whatever the size of your project STL always aim to deliver a high quality professional service to suit their clients requirements.

STL’s Credibility
STL are ISO 9001 and OHSAS 18001 Accredited and do regular audits to ensure they adhere to the relevant policies, processes and procedures set in place. This has a direct impact on the quality of service they provide to their customers and helps ensure that standards at STL remain consistently high.

STL can be contacted on:-